For many more of Warren’s “Parables” commentaries, click here.
See the list of all 44 parables with links to their passages. 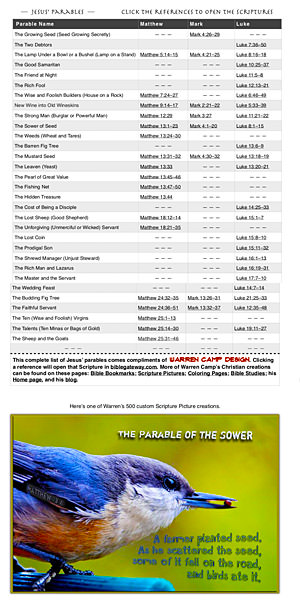 Thanks to Bible Project, we can see and appreciate the mysterious promised deliverer whom Matthew revealed. He, the Messiah, would one day come to confront evil and rescue humanity.

An animated video from Bible Project

The Visual Bible: Matthew is a 1993 film portraying the life of Jesus, as found in Matthew's gospel. His complete gospel is presented word for word, based on the New International Version (NIV) of the Bible. Directed by South African filmmaker Regardt van den Bergh, this movie stars veteran actor Richard Kiley in the role of Matthew (who also narrates the movie), Bruce Marchiano as Jesus, and Gerrit Schoonhoven as Peter. Marchiano portrays Jesus as a joyous, earthy, personal man with a sense of humor.

In addition to this movie, you can watch a series of special “Matthew’s Gospel” videos on “The Beatitudes,” “Sermon on the Mount, ” Matthew Videos by Chapter,” and “Jesus’ Forty-Plus Parables.”

• See Warren's summary of the Parable of the Lost (or Wandering) Sheep (18:10–14), including a two-minute animated video clip

17:22–23  When they came together in Galilee, he said to them, “The Son of Man is going to be delivered into the hands of men. 23They will kill him, and on the third day he will be raised to life.” And the disciples were filled with grief.

18:21  Then Peter came to Jesus and asked, “Lord, how many times shall I forgive my brother or sister who sins against me? Up to seven times?”

• Warren's summary of the Parable of the Unforgiving (or Unmerciful) Servant (18:21–35), including a video

• Also see his summary of the Parable of the Workers in the Vineyard (20:1–16), including a video narrated by Max McLean

18:35  “This is how my heavenly Father will treat each of you unless you forgive your brother or sister from your heart.”

20:34  Jesus had compassion on them and touched their eyes. Immediately they received their sight and followed him.


"Jesus Curses a Fig Tree," and "The Authority of Jesus Questioned"

• The Parable of the Wedding Banquet (or Marriage Feast) (22:1–14), including a three-minute video

21:19–20  Seeing a fig tree by the road, he went up to it but found nothing on it except leaves. Then he said to it, “May you never bear fruit again!” Immediately the tree withered.
20When the disciples saw this, they were amazed. “How did the fig tree wither so quickly?“ they asked.


"Paying the Imperial Tax to Caesar," "Marriage at the Resurrection," "The Greatest Commandment," and "A Warning Against Hypocrisy"


"Seven Woes," "Destruction of the Temple," and "Signs of the End of the Age"

24:4–5  Jesus answered: “Watch out that no one deceives you. 5For many will come in my name, claiming, ‘I am the Messiah,’ and will deceive many.”


"The Day and Hour Unknown" and Three Kingdom of Heaven Parables

• See Warren's parable summaries: The Parable of the Budding Fig Tree (24:32–35), including a three-minute video

25:1–2  “At that time the kingdom of heaven will be like ten virgins who took their lamps and went out to meet the bridegroom. 2Five of them were foolish and five were wise.”

25:31  “When the Son of Man comes in his glory, and all the angels with him, he will sit on his glorious throne.”


"Sheep and Goats," "The Plot Against Jesus," and "Jesus Anointed at Bethany"

• See Warren's summary of the Parable of the Sheep and the Goats (25:31–46), including an animated three-minute video

25:40  “The King will reply, ‘Truly I tell you, whatever you did for one of the least of these brothers and sisters of mine, you did for me.’”

26:36  Then Jesus went with his disciples to a place called Gethsemane, and he said to them, “Sit here while I go over there and pray.”


"Jesus, Before the Sanhedrin," and "Peter Disowns Jesus"

26:75  Then Peter remembered the word Jesus had spoken: “Before the rooster crows, you will disown me three times.” And he went outside and wept bitterly.

27:5  So Judas threw the money into the temple and left. Then he went away and hanged himself.

27:22  “What shall I do, then, with Jesus who is called the Messiah?”Pilate asked. They all answered, “Crucify him!”

27:50  And when Jesus had cried out again in a loud voice, he gave up his spirit.


"The Burial of Jesus," "The Guard at the Tomb," "The Resurrection," "The Guards’ Report," and "The Great Commission"

28:18–20  Then Jesus came to them and said, “All authority in heaven and on earth has been given to me. 19Therefore go and make disciples of all nations, baptizing them in the name of the Father and of the Son and of the Holy Spirit, 20and teaching them to obey everything I have commanded you. And surely I am with you always, to the very end of the age.”

‹ ‹ ‹ Return to our Bible-studies Home page.


Author
Matthew, one of the twelve apostles, is believed by the majority of Bible scholars today to have written this gospel. He, whose name means "gift of the Lord," was a tax collector who, when personally called by Jesus, left his tax collector's booth to follow Jesus (Matthew 9:9–13). He's called by his other name, Levi, in Mark's and Luke's gospels.


Date and Place of Writing
Because of this gospel's Jewish slant, many believe that it was written in Palestine while others think that it had been written in Syrian Antioch. Based on its Jewish characteristics, it was possibly written in the early church period, perhaps the beginning of 50 AD, when the gospel was preached only to Jews (see Acts 11:19). However, others date it later, after Mark's gospel had been in circulation for some time.


Recipients
Clearly, seeing that Matthew wrote this gospel in Greek, his readers were obviously Greek-speaking people, including Jews. Although much of what Matthew expresses is aimed at the understandings of Jewish readers, he didn't allow his gospel to be restricted to the Jewish culture. In fact, it often highlighted non-Jewish events, practices, and mores, giving it a more comprehensive, all-encompassing presentation.


Purpose
Without doubt, Matthew made a stern effort to prove to his Jewish readers that Jesus was their Messiah. All three synoptic gospel writers (Matthew, Mark, and Luke) cite relevant Old Testament Scriptures, however, Matthew also includes a variety of excerpts meant to conclusively reinforce the basic theme of this narrative, that Christ Jesus is the fulfillment of the OT prophecies about the coming Messiah. In addition, because Matthew was writing to Jews, it was important for him to begin his gospel by identifying Jesus' Davidic lineage, referring to him as "the son of David."

Close
The Calling of Matthew